Just Like the Port of Savannah--Our Waterside Port Tour is Super!

Savannah was created by people sailing up our river on ships. Even before Europeans came here in the 1500s, Native Americans paddled the river in dugout canoes. The river has been a highway for trade since time out of mind.

"The Port of Savannah is home to the largest single-terminal container facility of its kind in North America, encompassing 1,345 acres. Moving millions of tons of containerized cargo annually, Savannah is also the third-busiest container gateway in the U.S., providing greater scheduling flexibility and market reach with direct links to I-95 and I-16, on-terminal rail, and 36 weekly container ship calls. The Port of Savannah is the most westerly port on the Atlantic seaboard, providing shorter transit times and greater efficiency for cargo destined for major inland markets. A hundred miles closer to Atlanta than any other port, Savannah offers superior connections to multiple markets by road and rail." (GPA)

Here's a video about what goes on aboard a ship visiting the Port of Savannah. Video courtesy Brian Boyle.

Our Port is a vibrant exciting place. The ships plying our waters are behemoths! Watching the tugs help them in and out of their moorings is impressive. If you want to see it all in person, call Island Shuttle Boat Tours at 912 657-5222 today! 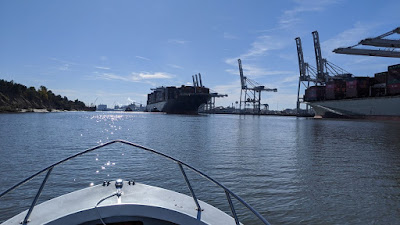 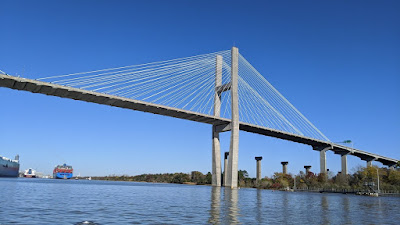 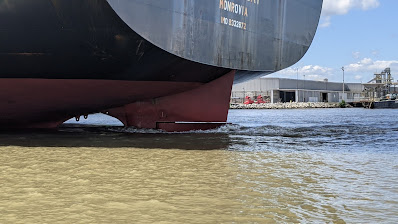 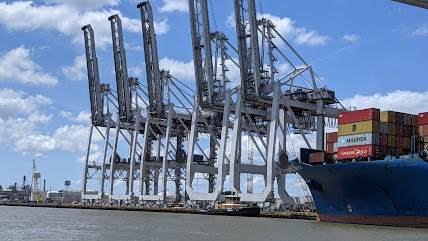 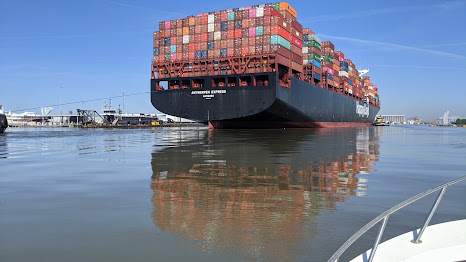 Hickory Dickery Dock... The Boat Just Sank Like a Rock!

I am on at Atlanta for the NASCAR race and my phone rings. It's Dr. Donohue Waters, who lives next door to the community dock.  He says "Hey! I'm looking at my dock cam and there's a boat sunk at the community dock!"

I reply, "please tell me it's not mine!"

I feel a flood of relief.

I have an idea of which boat it is, but I'm not sure, so I call the dock club president. He already knows about it. And so does the owner. Towboat US is on the way for a salvage recovery. In short order, they raise her with an airbag or two, tow her away, and tally up a major bill that will have to be paid by insurance or out of the owner's pocket.

For a boater, there are few sights more forlorn and sad than that of a sunken boat. Whether she's down on her luck, down by the head,  or completely upside down, a boat isn't supposed to be sunk.

The first thing that comes to mind is that someone has made a mistake--and whether it's an error of action or inaction, it's bad. You've probably heard that a stitch in time saves nine. Well, when it comes to a boat, a few dollars and a few minutes of work spent now may save a boatload of money later. And later may come sooner than you think.

In the case of this vessel, I observed her laying significantly lower in the water a few weeks ago after days of heavy rain. I alerted the owner who came and got the water out of her. What he failed to do however was to take that near-miss to heart and make sure his stuff was tight and right. And while I was enjoying a NASCAR race last weekend, Savannah had a whole bunch of rain come down.

Having a good bilge pump in working order, an automatic switch that will turn it on in the event of flooding, and a strong battery to power it are the keys to this not happening to you. The salvage bill for this event will be in the thousands of dollars. The electronics are ruined. The engine may be ruined. When it comes to a boat, out of sight must NOT be out of mind. In the event you are in the middle of getting your boat in good order when storms come, you may need to get your butt off the couch and go check on your boat. And take a good bailer.

Folks often underestimate how little water it takes inside your boat hull to sink her. If you have a cutout transom, a few inches of water inside her, and your stern pointed in the wrong direction, that slight reduction of freeboard is what allows wind-driven waves to finish the job. It takes less than you might think.

Sidebar: If your dock has a prevailing wind or wave direction, put the pointy end of your boat that way.

Even with a good battery and bilge pump (or two or more of each) you have to keep up with what's happening down below. In the case of a float switch, any piece of debris sloshing around might become lodged in the float and keep the pump running until the batteries run out of power. On the other hand, a piece of gear, like a throw-cushion (a type-4 PFD) or a loose fender might find itself interfering with the float operation. Then the pump, she no come on...

You have to attend to this stuff. Don't procrastinate.  Putting it off can end badly. Whether the bill is big or little, it's bad and it's sad and it doesn't need to happen.