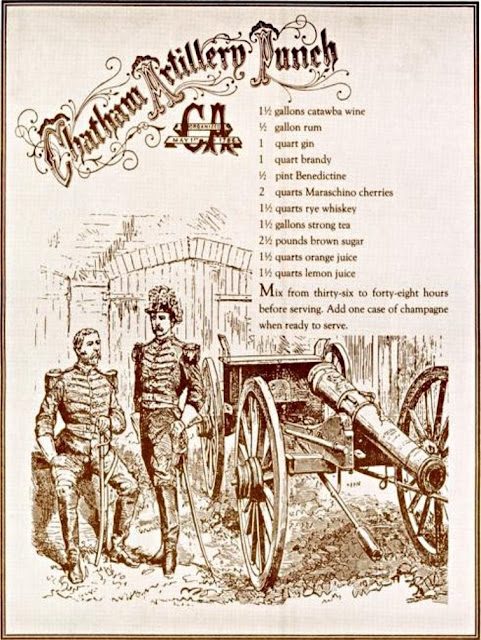 Savannah is world-famous for her history, her architecture, and her “go-cup” law – which encourages visitors to stroll the streets drink in hand. While almost every other city in America tries to keep consumption undercover, here in Savannah folks drink out in the open. In broad daylight.

Savannah mixed with hard-liquor before, during, and after the Trustees enacted their prohibition on rum.  The later loosening of their restriction was seen as a way to help the Salzburgers at New Ebenezer and other timber-rich Georgians sell lumber in the West Indies.  The timber-merchants needed a market for their products; the planters at Barbados needed lumber as they had cleared the island to grow sugar cane. The logical way for Barbadians to pay for this lumber was with molasses or the rum which was made from it.

As the decades unwound, the Baptists living in rural Georgia wanted to go “dry,” but Savannah was mighty thirsty.  Indeed, when the state of Georgia outlawed spirits in 1908 - 12 years before the 19th Amendment banned the production and sale of alcohol nationwide – Savannah and Chatham County considered seceding from the state and creating a separate Sovereign State of Chatham!

“When seceding was unsuccessful, Savannah became the unofficial headquarters for illegal imbibing … ‘Savannah’s location was perfect for moonshining, rum-running, and receiving bootleg. Moonshiners would make the bootleg liquor in the marshes, where it was easy to hide the stills, then they would run it through the narrow waterways out to the ocean and make a run for the international water line, about 3 miles out. They would also make pick-ups in international waters and then rush them back to waiting cars in the marsh.’ Al Capone looked to Savannah garage owner Sherman ‘Moose’ Helmey to make his rum-running cars, adding secret compartments and adjusting the suspension to make the car appear to be running light with a full load.” From Bootleggers and Bourbon at talesofthecocktail.com.

As Rusty Fleetwood pointed out in “Tidecraft,” our creeks, rivers and sounds are now playgrounds, but once they were a matter of life and death. While it might have been all oysters, shrimp and crabs during the day, at night it was boatloads of booze running our creeks.

On her fishing-business website, Captain Judy Helmey writes, “My father was Mr. Sherman Helmey, owner and operator of ‘Helmey's Garage.’  His nickname at the time was ‘Moose.’ During this time Daddy allegedly worked with ‘Big Al Capone.’ … My father's garage sold and repaired automobiles.  In fact, my father was known for his great mechanical ways.  I was told that he could take a regular truck or automobile and install secret compartments in which to transport ‘said Liquor or shipments of sorts.’  His expertise came in handy because after loading the car or truck down with a shipment it never showed. According to sources my father tampered with the springs making them hold a lot more.“ From missjudycharters.com

The demand for spirits spanned the socioeconomic spectrum. Whether rich or poor – everyone wanted a drink. Common folk imbibed at Speakeasies and locker-bars; the upper crust poured in their parlors. (story continues below)

In her book “Island Memories,” Marianne Heimes recounted an interview with one of Henry Walthour’s daughters in 2002.  Mr. Walthour was a wealthy Savannah cotton-broker who owned much of the south end of Wilmington Island in the early 1900s. He was a major partner and developer of the landmark General Oglethorpe Hotel, with its Olympic pool and championship golf course. He also had a large home on the Wilmington River with a dock and dock house.

Heimes wrote, “Although this was during Prohibition, Henry Walthour managed to smuggle whiskey back after stays at the family’s Quebec home. Combined with the local white lightning the whiskey made a fine Chatham Artillery Punch that packed quite a wallop.”

The wealthy weren’t inconvenienced by Prohibition and according to legend and lore, neither were the poor. Local stores sold big bags of sugar, and it wasn’t going in coffee. Sugar was used in isolated island stills to make moonshine. The fact that Walthour owned a dock would have made it easy for this moonshine to be delivered by boat under the cover of darkness; yet another example of our creeks and rivers driving our economic engine.
In "Once Upon an Island" Elizabeth Carpenter Piechocinski writes, "All people in Georgia are divided into two classes, those who have a little still and those who still have a little ... The irregular coastline and marshes with their winding, lonely waterways were ideal for smuggling bootleg whiskey into the state. Moonless night brought the sound of speedboats moving surreptitiously through the water off Wilmington, Tybee, Whitemarsh, and Skidaway ... These swiftly moving crafts were used to unload contraband liquor from vessels outside the three mile limit ... "

While listening to a program on GPB radio, I heard a reference to “The Savannah Four” during a discussion of Prohibition; and the men and women who worked for and against it. I love it when a national story has roots that lead here, so I investigated.

Again, from Bootleggers and Bourbon, “Capone wasn’t the only one with the entrepreneurial spirit – ‘The Savannah Four’ are possibly the most infamous bootlegging ring, made up of Fred-Senior, William, Carl, and Fred-Junior Haar. They sold bootleg liquor from their grocery store during statewide Prohibition; National Prohibition made them even more successful. They controlled a fleet of ships that ran loads of booze from Scotland, France, Cuba, and the Bahamas; once shipments were brought ashore they were broken down and run by road, typically in trucks, disguised as potatoes, or in faux oil tankers.”
The Haar men must have been tough characters. There is an interesting anecdote referring to them in "Once Upon an Island." In the story, J.D. Powell, who owned the Desoto Hotel and the Savannah Beach Club, lost big in a poker game and owed money to some Mafia men from up north. Mr. Powell's agent took the winners out in a boat at low tide to look at some 'salt meadow,' and tricked them into accepting 6000 acres of salt marsh as payment in full for the debt. The only thing that kept them from coming back and making trouble was the 'Haar boys on Tybee Island,' who the Mafia were afraid of.
That must have been an exciting time to be a small-boat captain, when a single run from the ship offshore might buy the boat! (story continues below)

Imagine yourself in an unlit bateau, skiff, or flat; loaded deep with boxes of hooch and gliding along Freedom Creek after pushing off from the still on Skidaway.  You slide under a moonless night with a muffled motor. You quietly navigate the twists, shallows and rakes to reach a meeting place on a dry riverbank or a rich man’s dock.  With no talk other than a quiet challenge and response, the cargo is moved from boat bottom to back seat and trunk, then a stack of cash is passed from hand to hand.  With a whispered “Good luck; see you next time,” you shove off the bank and into the creek. The car rumbles into the night, and Georgia’s thirst is slaked again - the law notwithstanding. As it was in 1733, so it was during state and federal dry spells, and so it is today: Folks are going to have their libations.