Recently, I got to spend a day with Ben Wells, a marine science educator at Savannah's Oglethorpe Charter School. Ben's students get to go with him on the boat and learn about the estuarine environment and, on that trip, the Georgia coastal barrier island known as "Ossabaw."

Ben is a fascinating source of information about this historic area; not only from his college education but also from his local upbringing and being steeped in the history, culture, and legends of this place. Ben belongs to the marine-rescue squadron based at Coffee Bluff, and I can only imagine the stories that get passed around by the old salts there.

As we passed through the Skidaway Narrows, Ben explained to his students how - shortly after the civil war ended - Freedmen moved from Ossabaw Island to live and work at Pinpoint harvesting and shipping oysters and blue crabs. Pinpoint is near the narrows, and the old buildings there are visible from the river. Supreme Court Justice Clarence Thomas is from PinPoint.

Ben then commented about the Narrows itself. "You know, this waterway wasn't always here. The Army Corps of Engineers dredged this out in 1905." 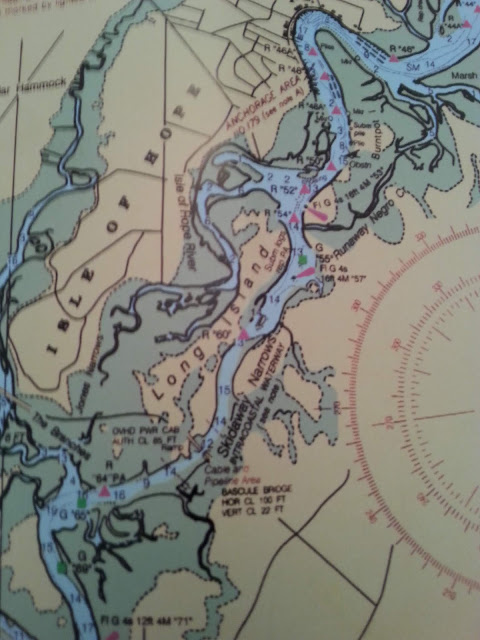 That remark piqued my interest for two reasons. First, the "narrows" part of the Skidaway River is, in my opinion, the most beautiful waterway in Chatham County. Second, when I first became a Savannah boater in the early 90s with an old 18-foot sailboat, I entered the water at the Skidaway Narrows boat ramp next to Butter Bean Beach.


You can learn more about how the state park came to be by clicking here...

As we motored around Burnside Island I asked Ben, "hey, is there a go-to resource you use for the history of this place?" He answered, "well, a good book to start with is with Buddy Sullivan's 'A Georgia Tidewater Companion" So I took out my smartphone and bought it right then and there. All hail Amazon! 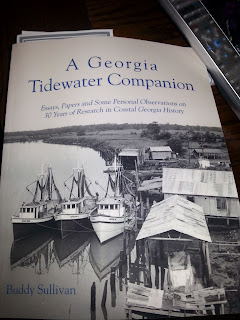 Now, much of this book concerns the areas in and around Darien, Georgia. But there is a lot of interesting information about the Savannah area as well. I found the information about the creation of the Skidaway Narrows section of the Inland Waterway - known today as the Atlantic Intracoastal Waterway. But even more interesting to me was Mr. Sullivan's writing on the history of the Inland Waterway before it traversed the Skidaway River.

Back in the day, you see, boats went inside of  Wassaw through the Romerly Marsh! (story continues below)

In 1994 we purchased a small fast boat and began exploring the creeks, rivers, and sounds that make living here so special. One day we ventured into a long straight waterway headed south on the inshore side of Wassaw Island proper. I remember thinking "nature doesn't make straight creeks, this must be man-made!" We kept exploring and eventually came out on the south end of the island at Ossabaw Sound.

I later learned that the straight section is named "New Cut."

I loved that trip then, and I still love it today. I did it last year on a 45-foot excursion vessel, and though it was a tight fit in one of the turns, we made it through without bumping anything.

In the image above, New Cut is depicted running north-south through the marsh portion of Wassaw. It is a narrow and beautiful stretch of water. The long narrow island it bisects isn't named on the chart, but in the text, there is mention of the cut going through "Long Island." If you look at the southwest part of Long Island, you can see where Rhodes Creek looped around and then cut through. Note the 21-foot depth indicated on the outside of that loop. That's what 6 to 9-foot tidal flows do to a mud bottom. The rapidly flowing water digs a deep hole here and puts a bar just under the surface there.


There are two kinds of boaters in Savannah. Those that have run aground, and liars.

From reading the "...Companion" on page 432-434, one can deduce that the original route of the Inland Waterway was west of New Cut, passing through the straight path named Habersham Creek (Wassaw north image). Now here is where the story gets interesting. Political intrigue and special-interest played a part in determining where the waterway would be.

The text states, "The Federal River and Harbor Act of 1882 opted for a Romerly Marsh inland waterway passage, which, by means of dredging a cut through the Wassaw Island marsh, entailed a connection of Dead Man's Hammock Creek with Wassaw Creek north of Odingsells River. This longer, more expensive, transit, which bypassed the previous route through (Adams Creek and) Steamboat Cut, was presumably selected to satisfy local commercial interests that preferred improved access to the Wassaw Island beaches."  The Georgia and Florida Steamship Company "regularly transported passengers to the island." Then as now, money bought influence and allowed public policy to be determined by private interests. The Army Corps would comment on this later, however!

On the left side of the Wassaw south image above you can find Steamboat Cut, adjacent to Delegal Creek and today offering access to Delegal Marina. Steamboat is so named because once upon a time - long before Union Camp owned Skidaway Island or created the Landings and the marina - it was cut for and used by steamboats plying the creeks of Romerly Marsh! I have always associated it with the marina. Now I know different.


"In 1885 and 1886 New Cut was again dredged...It was a channel 4,117 feet through the Wassaw marshes and Long Island: yet in the two decades of its use as the primary inside route it was never considered a particularly satisfactory, nor convenient, passage."

A later survey and report by the Corps of Engineers stated that "had not the opening of the Wassaw Creek route been made mandatory by Congress that route would not have been selected by the engineers" The report recommended abandoning the New Cut route in favor of the Habersham Creek route. It didn't happen.

"The Emergency River and Harbor Act of June 6th, 1900 authorized a 'preliminary examination and survey of the Skiddaway (sic) Narrows connecting the Isle of Hope with with Burnside River for a channel 75 feet wide and 6 feet deep at mean low water'... 'the present navigable route... consists of an extremely tortuous and very narrow channel, the bottom of which is bare at low water and at high water an ordinary rowboat cannot pass through...without the oars being interfered with on both sides from the marsh grass growing on the banks" The engineer noted that "Skiddaway Narrows in not worthy of improvement by the United States."

A later survey reversed this, noting that the Skidaway route would be 6 and one-half miles shorter than the Wassaw route. The route being further inland also offered more protection from storms at sea and enemy forces.

"Congress authorized the project and contract dredging of Skidaway Narrows began in October, 1905."

With special thanks to Buddy Sullivan for creating "A Georgia Tidewater Companion" from which this post is largely derived. All credit is due him. You can buy this book on Amazon and I recommend it.

Bull River Cruises offers a 6-hour circumnavigation of Skidaway Island for groups of up to 40. If your civic, church or corporate group could benefit from a ride through our coastal history and beauty, visit www.bullriver.com or call 912 657-5222. You can experience New Cut and more for yourselves!