So, Exactly Why Do I Have to Have a Sound Signal on my Pleasure Boat? 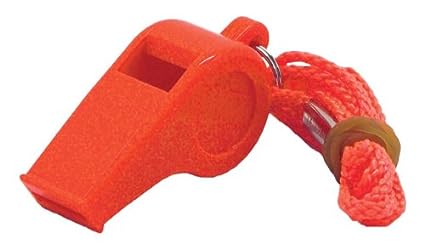 If you climb aboard most any small boat you will see a whistle attached to the keychain, or a horn stowed within reach of the wheel or tiller. And of course, you may have a horn installed by the manufacturer. Many of us know we have to have that gadget on board, but some of us aren't really aware why it must be there.

As I wrote in a previous post, sound signals are "required" to be used when navigating near other vessels - meeting, crossing or overtaking and within 1/2 mile. Inland rules say that we should signal intent, and the other vessel should answer with the same signal if in agreement or give the danger/doubt signal (4 to 6 short blasts) if in disagreement
In 29 years of boating on Savannah's waterways, I have never heard this occur. If you blow a whistle at a boat in Turner's creek they will probably wave or flip you off.  Inland rules also allow a radio exchange instead of sound signals when operating near other vessels, and I have occasionally heard this occur between vessels headed up and down the Atlantic Intercoastal Waterway (the ICW). Many small boats don't even have a marine VHF in operation... Ships in the river don't talk on channel 16.

But there IS a time when that whistle could prove to be very important to you. Imagine that in the spring or fall you elect to run over to Daufuskie Island for the afternoon, or out the sound to one of the barrier islands. When it's time to return to Savannah you discover that a big temperature differential between air temperature and sea temperature has created fog - often advection fog in the Savannah area. You need to get home, but you can't see much.

Can you legally proceed? Yes, within limits. You must slow down! You must listen for an approaching vessel forward of your beam - and the idiot coming up behind you blind and fast. And of course, you must be on the lookout even though you can't see much. That whistle hanging on your keychain? This is when you are going to blow that whistle - a "prolonged blast" of about five seconds - HARD - every two minutes. This is when you are underway and making way. (making wake). If you stop and are not tied to a dock or anchored, you are still underway but not making way. Now you offer up two prolonged blasts every two minutes.

Now, don't stop in the Savannah River in fog, because if a ship happens to be coming up or down the river, they may not hear your whistle and probably can't stop or turn if they did. Ships in the river in fog WILL be blowing big horns and/or sounding bells. Listen for them.

You can proceed at a slow speed, say five or seven knots, eyes and ears open, making your sound signals with your whistle or horn, and keeping up with your progress on your GPS. (You do have a GPS if moving in fog, right?) If you do happen to have a radio, this also might be a good time to self-announce your position and intentions on it. Be brief and to the point on channel 16.

And don't forget to turn on your lights...

Here is the Coast Guard's set of rules on their site...