If you go boating here, you will encounter fog sooner or later. It's good to have a plan and be familiar with the rules for these conditions.
Buddy and I needed to move the 45' Island Explorer on a foggy morning. As I hadn't thought about this for a while, I took my smartphone out and googled "Sound signals in reduced visibility." This information can also be found in the Coast Guard's "rules of the road" handbook. Click the link for a printable color pdf "cheat sheet" for lights, shapes, and sounds.
Click here for an abbreviated list of rules.

We decided that we would post a lookout (me)  all the way forward on our vessel. My only job was to keep my eyes and ears ready to detect a hazard and my mouth ready to sound the alarm.

The lookout must avoid being distracted by conversation, pretty sights on the water (or on the boat) or anything else.

Our first step was to turn on the navigation or "running" lights. Our second step was to sound a prolonged blast on our horn every two minutes while under way and making way.
(story continues below)

If you don't have a horn on your boat, you must have some other sort of sound signaling device. A handheld plastic whistle is about the minimum practical equipment for this, and if that's what you have you must be able to blow it steadily and strongly for five seconds.

(c) The term "prolonged blast" means a blast of from 4 to 6 seconds' duration. Whistles give coded signals that are made up of one or more "blasts," each of which will last either about one second (short blast) or from four to six seconds (prolonged blast). There are no "long" blasts in the navigation rules."


As I lay in bed at night on Talahi Island, I sometimes hear the giant ships in the Savannah River channel sounding prolonged blasts on their horns. If the river gets thick fog, the river pilots stop bringing the ships in. Their size and bulk makes it unsafe to travel the river. They then pile up just off the coast and wait for conditions to improve.


Any time you become aware of a vessel forward of your beam you should slow to the absolute minimum speed at which you can maintain control. If Captain Smith of the Titanic hadn't been running on full steam in restricted visibility (dark night conditions) we wouldn't know his name. You don't want to read your name in the newspaper either - go slow in fog.

In particularly thick fog, you must proceed at the minimum speed that allows control.
If things get "too hairy" you may want to stop. If you do stop, you now must give two prolonged blasts at intervals not to exceed two minutes. The memory trick is "if you aren't making way, you have more time to blow, so blow twice."

One thing to keep in mind as you attempt to follow the rules and do everything right is that other boaters may not have a clue, and may be ripping along at full speed. Listen for this, and be ready with the horn, wheel, and throttle. In an avoidance turn, you should avoid turning to port (left) unless that is the only way to avoid a collision. 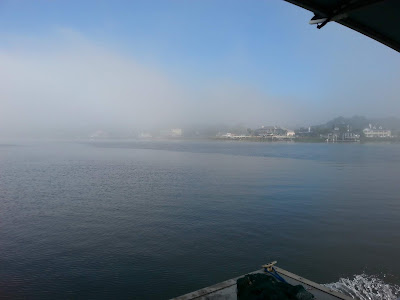 As the sun warms the air, the fog may begin to break up or dissipate. You may be able to increase speed in clear areas, but should be ready to slow down again in thick spots. No amount of desire to "get there" is worth injuring someone or damaging a vessel.


You can and should make good use of your radio in restricted visibility. The ability to communicate with other boaters helps with situational awareness. But remember, not everyone on the water has a radio and those that do may have it off or on the wrong channel. If you do have a radio and are operating in restricted visibility, maintain a listening watch on marine channel 16. You can also self announce your intentions and actions using the alert words, "securite, (pronounced sercur-i-tay) securite, securite"

If your message is short, you can send it on 16, if it will be long you should switch to a working channel.

Here's an example of a radio call to announce your position and intention on the radio,

"securite securite securite, this is (pleasure, fishing, sailing, cargo, towing) vessel Young and Dumb entering Field's Cut from the Savannah River. Out" You may want to practice what you are going to say before you push the transmit button. Once you push that button, your transmission should be accurate, bold, and concise. If you expect a reply from another station you should end your transmission with "over." If not, use "out."

By following the rules and using all your senses (including the common one) you can safely travel in an obstruction to visibility - within limits.  Use every tool and resource at your disposal, and expect the unexpected. If you are using a GPS for navigation, remember that these sometimes have position errors. You can back up what the GPS is showing you with your depth gauge and tide stage, and by deductive reckoning from a known point to another known point.

Radar can also assist with navigation and threat detection - if you have it. We don't. Modern and extremely well-equipped boats might even have the ability to display other vessel's position, course, and speed on a display. We don't have that either. But we do have eyes and ears.

There are other sound signals for boats not under command, with restricted ability to maneuver, constrained by draft (international rules), towing, being towed etc.  It's a good idea to periodically review these sound signals, and/or carry a quick reference card at the helm if underway in restricted viz... 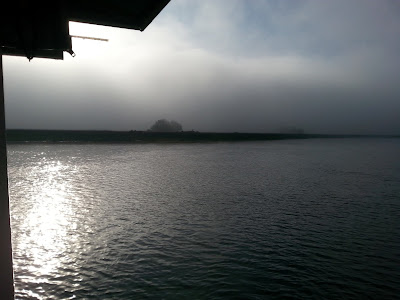 Disclaimer: The author makes every effort to provide good information and links to more resources, but this blog is not intended to replace formal training or a detailed study of the rules and regulations applicable to boating. I hope a novice boater will view this as a point of departure for further study and learning. I also hope an experienced boater will share that experience and whatever tips and wisdom come to mind.