How not to run aground... from the folks at Freedom Boat Club...

Click here to read about staying in the channel and off the mud...! 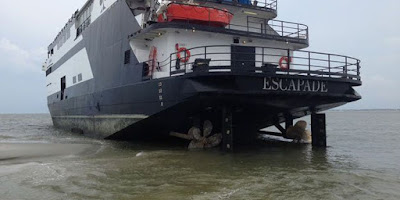 "Families cheered late Wednesday afternoon as buses began rolling into the parking lot at Tradewinds Casino Cruises at the old Williams Seafood docks off U.S. 80, carrying passengers who had left nearly 24 hours earlier for what they expected to be a five-hour gambling cruise.

The fun ended shortly before midnight Tuesday when the casino cruise ship became grounded on a sandbar between Tybee and Hilton Head islands.

It would be another 16 hours before the 96 passengers set foot on dry land, leaving most of them hot, hungry and exhausted - but mostly glad to be home."  (text and image courtesy SavannahNow and Mary Carr Mayle posted July 17th, 2014)
at April 23, 2019