Do You Know Your Knots? 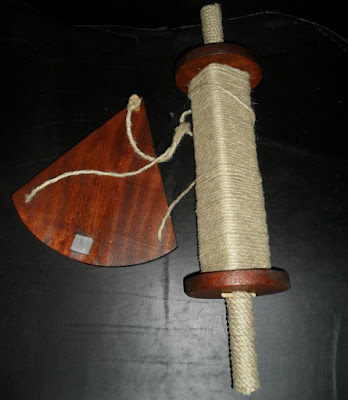 "The term knot dates from the 17th century, when sailors measured the speed of their ship by using a device called a 'common log.'This device was a coil of rope with uniformly spaced knots, attached to a piece of wood shaped like a slice of pie. The piece of wood was lowered from the back of the ship and allowed to float behind it. The line was allowed to pay out freely from the coil as the piece of wood fell behind the ship for a specific amount of time. When the specified time had passed, the line was pulled in and the number of knots on the rope between the ship and the wood were counted. The speed of the ship was said to be the number of knots counted (Bowditch, 1984).

"... Mowett heaved the log, waited for the red tag to go astern and called 'TURN.'
'STOP!' cried the quartermaster twenty eight seconds later, with the little sand-glass close to his eye.
Mowett nipped the line almost exactly at the third knot, jerked out the peg and walked across to chalk 'three knots' on the log-board." (story continues below)

Knowing the vessels speed and course allowed the navigator to complete  Ded(uctive) reckoning (aka dead reckoning) of the ships position since the last known position.