This article was originally published in the October 2019 issue of Southern Tides Magazine.

Pictures and Story by Dan Foulds


On a fine Fall morning, I arrive at the University of Georgia’s Shellfish Research Lab on Skidaway Island to learn more about their project to create an entire Georgia industry from scratch. As I speak with Emily Kenworthy, the public relations coordinator, it quickly becomes apparent that I have much to learn about oyster farming and mariculture  - aquaculture in a marine environment.

Emily walks me down to the docks and introduces me to Rob Hein and John Pelli. These are the extension specialists working with the Shellfish Research Lab on the oysterculture project for the benefit of the nascent industry. These guys are where the rubber meets the road, so-to-speak, and the farmed oysters placed in the natural environment are their babies. (story continues below)

In the same manner that states and universities send “agricultural extension agents” into the field to help farmers produce more crops, so the University of Georgia provides mariculture extension specialists to help maritime farmers do the same. The mission of the Shellfish Research Lab on Skidaway Island is to determine how best to farm oysters in Georgia, and then to provide oyster “seed” [or “spat”] to Georgia’s future oyster farmers. 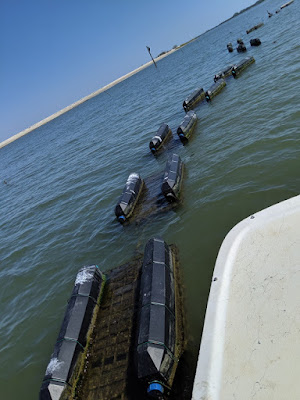 These future farmers will purchase bottom leases for $50 per acre and use floating or stationary oyster cages with a fee of $1 per cage.. They are well into phase one, and phase two, commercial farming, will probably begin (this) summer. While the harvesting of wild oysters in Georgia is currently on a relatively small scale and is limited to collecting the bivalve mollusks from beds, reefs, or “rakes;” in the very near future, it’s going to be a much larger industry, thanks to the activities going on at Skidaway.

At present, commercial farming of oysters using floating or bottom cages is not permitted in Georgia. A bill passed (last) year in the Legislature provides for the sale of leases to farmers. The legislation created controversy over the details, which are being worked out by a stakeholder’s advisory group.


Farming of oysters is a multi-step process. As the oysters grow from fertilized eggs through to adulthood, they must be protected, fed, and provided with a steady supply of clean oxygenated water. The first steps take place indoors at the University of Georgia's Shellfish Research Lab located on Skidaway Island. Upwelling water systems provide aerated water to the juveniles which are kept in place with fine-mesh screens. 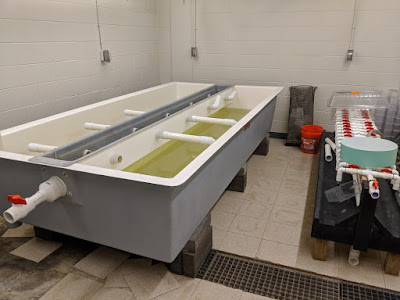 As the oysters mature and grow they are moved to progressively larger containment equipment and eventually they are put into floating cages and placed into an estuary or sound. The floating cages lay either just under the surface - or when flipped on top of their floats - just over it. Cages must be flipped for one day a week in summer and a day every other week in winter to protect the oyster shells inside from becoming a habitat for free-swimming wild spat searching for a surface to attach to and grow on.


Whereas a perfectly formed “single” farm-raised oyster might fetch seventy to ninety cents at the market, one that has been colonized by other spat and turned into a cluster will only fetch about a dime.  For reasons not completely understood, spat show a propensity to anchor on oyster shells over other surfaces. Flipping the cages also prevents other marine growth from taking hold, and keeps the oyster shells clean.


Our task today is to flip the cages placed just off the UGA's shellfish research lab dock, and then to ride out the Skidaway and Wilmington Rivers and through Tybee Cut to the cages situated in the old fish habitat at the opening of the Cut into the Bull River. 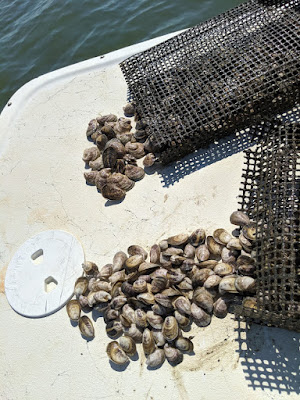 After they drop me off and have lunch, they will return to the cages and painstakingly empty each mesh bag onto the front deck of the boat. They will count and measure every oyster in every bag in every cage. They will also count and remove oysters that have died – hopefully a small percentage. There are subtle variations in how the oysters are prepared and placed – some of the cages are situated on the bottom. The objective is to determine which methods yield the best results, and they are using the scientific method to derive results.

Rob is a native of Athens, Georgia and a graduate of UGA with a degree in Ecology. His background includes middle-school teaching, and he confides that while teaching was okay he missed doing research and was glad to get a glowing recommendation from a past-colleague which led to a job at the lab.

Rob is very knowledgeable and explains as much of oysterculture as I can digest. He tells me that there are diploid and triploid oysters in the cages we are working with today. Triploids cannot reproduce, and do not spend energy on creating sperm or eggs for reproduction.

Rob emphasizes that there is no genetic modification taking place. He explains that triploids will grow faster and therefore come to the market sooner and be more profitable. Nevertheless they are growing both varieties in the cages to see which ones do best. 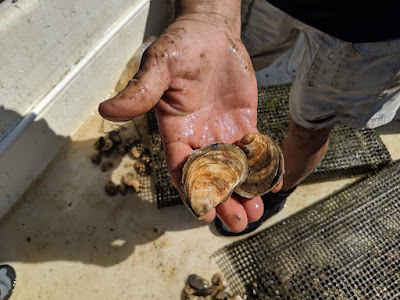 As we ride out the river and I listen to Rob and John, I begin to realize that there is a whole world of oyster consumption beyond anything I have experienced.  My oyster eating and knowledge is limited to the typical low-country backyard oyster roast. All over America, people go to restaurants and sample oysters from every coast, with each region of origin having its own taste and characteristics.

Rob explains to me that an oyster from a specific region might be described as “a well-balanced combination of sweetness at the start and a buttery soft brine finish.”  Who knew that oysters could be a component of fine dining? Not me, but I am excited about the prospect of eating my way to better understanding. I can imagine tucking into a sampler platter with oysters from east, south, and west. No cracker, no cocktail sauce, just the oyster speaking for itself. Getting hungry yet?

One notable aspect of oyster aficionados is their willingness to spend real money for the object of their desire. That translates into opportunities for those who are willing to dive into the business. And that is coming soon. For now, the objective of the lab is to learn how to produce oysters with the perfect shape, shell, taste, and texture, and then to pass on that knowledge - and the spat - to replicate the production on a large scale.

John Pelli is a former Union Camp managing-engineer who has traveled all over the world. Of the three of us on the boat, he is also the only person who has actually engaged in commercial mariculture. He once operated a clam farm close to where the floating oyster cages are situated in Tybee Cut.

John's background makes him an obvious choice for extending expertise and practical skills from the University of Georgia and the Shellfish Research Lab to the future oyster farmers who will create the harvest. When I ask him if he is any kin to my friend and boat-mechanic Terry Pelli, he laughs and says, “he’s my brother.” As my friend Julius Bennett often says, “Savannah is really just a big one-stop-light-town!”

As we pull up on the cages and Rob and John begin to flip them, I can see that it is hard work. Our boat has a winch motor and a swing arm to provide mechanical assistance, but as Rob points out, flipping 500 cages would be tough. If the water is the right depth you can flip baskets while standing in it, and John is working on other forms of mechanical assist as part of the project. Even so, like shrimping and crabbing, oyster farming will be hard physical work.
As the legislation to permit oyster farming was being created, there were differences of opinion as to how much of the year should be allocated to harvesting; cooler months only, or all year long. Another point of contention concerned how the bottom leases should be distributed; by lottery open to all, or Georgia residents only, or to the highest bidder. While the extension specialists are undoubtedly aware of these issues that will be ironed out by the advisory group, they aren’t concerned with them or the results. Their only concern is how to create the perfect oyster, using a method that is sustainable, repeatable, and predictable. 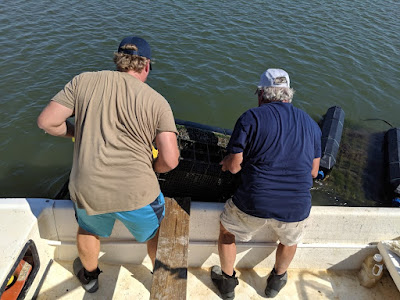 All Georgians will benefit from their labors, and I am grateful for what they and the rest of the team at the UGA Marine Extension and Georgia Sea Grant Shellfish Research Lab are doing. Here's to Oysters everywhere!