Exploring our Maritime History with Rusty Fleetwood and “Tidecraft” 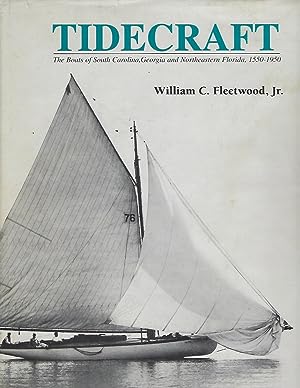 This article originally appeared in the December 2019 Southern Tides Magazine.


Anyone who knows me has surely heard me gush about Buddy Sullivan over the last year or so. Mr. Sullivan is an incredibly prolific writer with a huge body of work covering the history of coastal Georgia. His primary focus is on the areas around Darien, but in the course of telling those stories he includes fascinating details about places all up and down the coast.

I conducted a tour last year for kids from the Oglethorpe Charter School in Savannah, and overheard their teacher - Ben Wells - mention that Skidaway Narrows wasn’t the path of the Intracoastal Waterway until 1905. This piqued my curiosity, so I asked Ben about his favorite reference for maritime history in the low country. He pointed me to “A Georgia Tidewater Companion” by Buddy Sullivan. It’s a great resource for anyone interested in the past of this place. And in the vein of “one thing leads to another” Mr. Sullivan, with a reference in one of his notes, led me to the most amazing boat book I have ever seen, “Tidecraft” by William [Rusty] Fleetwood.

If you are at all interested in boats and boating between Georgetown in South Carolina and St. Augustine in Florida, you must get your hands on a copy of Tidecraft. Live Oak Library has them as does Amazon.

As Fleetwood explains; the creeks, rivers, and sounds upon which so many of us play, in boats that are little more than toys, were once the best and most efficient way of getting large numbers of people and countless tons of “goods” from one place to another. The rivers, and the boats upon them, were matters of life and death. They enabled incredible wealth to be accumulated by a fortunate few, aided and abetted a subsistence living for many, and also helped the most unspeakably cruel acts to be perpetrated upon slaves from the west of Africa.

It’s all there in “Tidecraft,” all four hundred years of it. (story continues below)

Our region served as ground-zero for centuries of desperate, bloody conflict between the world’s great powers – Spain, France, and England. And also of course, the Native Americans who were already here when the Europeans arrived on scene. Greed, avarice, and murder in the name of God were in full swing all across the last four hundred years of low country history, and Fleetwood paints vivid portraits of the drama with words and images gleaned from all over the world. He connects the dots between Barbados and Bermuda and Charleston and Savannah.

A few months back I wrote about Causton Bluff, and Mr. Causton becomes much more real in “Tidecraft.” He designed a flat-bottomed cargo craft derided by Von Reck around 1736, as being “… so heavy and so unsuitable for the Savannah River … the prow is not sharp, so that it stops the water. The oars and rudder avail nothing … “

While the typical river craft that had to be rowed upriver against a steady downstream current was narrow and streamlined [and often made from a dugout tree trunk], I think Causton designed his broad, flat-bottomed boat for a different environment and several times the payload. Causton Bluff is on a tidal river and the tidal creeks and rivers flow where you want to go twice a day.

Imagine trying to get into the head of someone who lived three centuries ago to understand what they were thinking. That’s what happens in “Tidecraft.” As well, much is brought to light that has been largely forgotten – for instance - there was a time when a skiff was an “esquiffe,” a sloop was a “shallop” or “chalupa” depending on where it was made, and a frigate was a “fragata.” There was a Carolina Skiff long before fiberglass was invented. It was built cheaply and for work, it was the truck of the waters, and it was known as a “periagua.”

The entire maritime world is much more connected than one might imagine, and “Tidecraft” gathers up many of the threads and traces them from today's boats to their distant beginnings. I hope you enjoy the journey.