The World is Your Oyster! 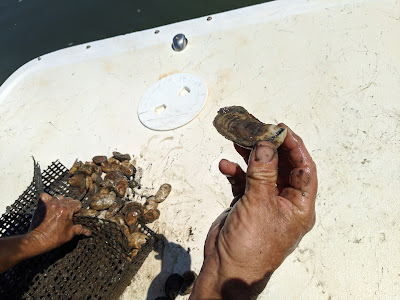 October means three things are happening in our region. First, the brutal heat of summer is easing into the more user-friendly climate of fall. Second, many of us are watching College Football on Saturday afternoons if we aren’t out fishing or hunting. Finally, on many weekend evenings we gather with old friends and new around an Oyster Roast; engaging in the time-honored low-country tradition of shucking and shoving these tasty morsels straight into our mouths.
The term “roast” is something of a misnomer. Roasting involves dry heat, and most of the time we are cooking oysters with wet heat in the form of steam. Whether we steam them in piles covered with hose soaked burlap on a metal shelf set over a roaring fire, or in a purpose-built propane-fired oyster cooker, or in a boil-pot with an inch or two of water at the bottom and a brick under the basket; the objectives and results are about the same. We don’t want to “boil” our oysters in water as this would wash much of the flavor out of them. Rather we want to cook them gently with steam, over several minutes. Steam keeps them from drying out and reduces shrinkage.

As the shells “pop,” or open slightly thanks to heat and moisture, we dump them in a pile onto the serving tables and belly up beside each other. We might stand shoulder to shoulder with a complete stranger, shucking and sharing and laughing at our great good-fortune; the wonder of living a low-country life.
Some purists eat them naked. Some dredge them through hot sauce and melted butter. Some like them covering a saltine - the only oyster cracker worth its salt.  And then folks like me sandwich them between cracker and cocktail sauce and cram the whole assembly inside at once. It ain’t pretty but it’s fun.

An Oyster Roast is a great equalizer. It’s a supremely egalitarian thing. You might have a congressional candidate on one shoulder and the lady who cleans houses for a living on the other.  The three of you will stand there, enjoy each other’s company, and solve the world’s problems as you harmoniously fill your bellies with this naturally salt-seasoned bounty from the sea. Should you and your table-mates deplete your pile, you will patiently stand and swig your beer or iced sweet tea until another bucket of the steamy bivalves arrives.

Crash! Onto the table they go! “Slide in right here friend!”
Etiquette? Grab oysters from the pile in the middle of the table, one at a time. Only take what you will eat. It is okay to shuck for a friend, but don’t expect anyone to shuck for you. Don’t show off your speed-shucking skills at a table populated by casual shuckers, it will make you look inconsiderate. Don’t forget to enjoy the social component of the experience as well as the gastric, in other words, speak with your neighbors between mouthfuls. I mean after all, you do want to be invited back, right?

Invariably, while eating, some bits of oyster will get lodged between your teeth where they hang tenaciously and evade capture.  It’s a good idea to have a roll of floss in your pocket for a discreet oysterectomy. It’s also a good idea to bite down gently on each new arrival a time or two to make sure no shell fragments entered your mouth as stowaways. When its tooth or crown or filling versus shell, the shell wins. The number one rule is that there are few rules. Just have fun and be friendly.


Purpose-built tables will have a hole cut in the middle with a shell-bin beneath for easy tossing. The table should be kept cleared for action.  Another option is a folding plastic table with a shell-bin on either end. Don’t put anything in the shell-bins but shells, as any trash has to be picked out by hand when they are dumped for one of the myriad shell-recycling options available. On Talahi Island where I live, we dump our shells on the community-dock access-road to fill the wheel ruts for a level driving surface. They crush under tires and make a fine free road-bed. There are many takers for any leftover oyster shells, as long as they aren’t mixed with trash. Check with your city or county for recycling options.

The future of the oyster industry in our area is bright. From production to consumption, they are already part of our culture, traditions, and history. Thanks to the work of the scientists on Skidaway Island, progress is being made on increasing the harvest from right here versus having to buy them shipped in from elsewhere. You can get delicious clusters from the May River Oyster Company in Bluffton now, and “Single Lady” oysters from Lady’s Island Oysters in Seabrook. There are other local sources for wild-harvested oysters if you look.  If you are adventurous and licensed you can even do some harvesting for yourself in selected sections of our waterways. Here’s to oysters everywhere!