Be Careful Out There...

Riding on (the) Bow or Gunwale of a (small boat) is illegal if the boat is not equipped with a railing or some other retaining device. As a boat operator, you are prohibited from allowing your passengers to ride on the bow or gunwale. (GA DNR) Click here to learn more...


BEAUFORT COUNTY, SC (WCSC) - A woman who lost her 19-year-old daughter in a boating
accident in Beaufort County has refiled a wrongful death lawsuit against a former 14th circuit solicitor and members of his family..." Read more...


As a former medevac pilot, I have seen terrible sights. And flying Memorial Hospital's LifeStar helicopter in this area meant that occasionally those sights involved boats and boaters. I was never called to a fatal boating accident. That was my wife's flight.

Jeanne, a former LifeStar Flight Nurse, was on duty on the day that a family was riding in a boat near Tybee Island. One of the passenger's hats flew off as they sped across the water. The operator made a rapid turn to return to the hat. A woman on board lost her balance, fell from the boat, and was struck by the propeller which severed a major artery and caused a massive and immediate loss of blood. She died shortly thereafter.

TYBEE ISLAND, GA (WTOC)  - An island community is in mourning after a long time Tybee resident ... was killed in a boating accident over the weekend. Her family rushed her to the nearest dock, which was at the Crab Shack, where emergency crews tried to save her.

Flanigan still can't believe what happened. It was business as usual at the Crab Shack, when a boat pulled up to the dock, the people on board in desperate need of help. "I grabbed all the towels I could and came on down, by that time they were getting her out of the boat," said Flanigan.

Everyone was trying to save (the) 38 year old (woman). (She) was out on the water when she was thrown from the boat. (She) hit the propeller. "She was so young and had her whole life ahead of her, and it was over in a heartbeat," said Flanigan.

Flanigan has known (the woman) since she was a little girl. "She's a Tybee girl, been here forever, wonderful person. It's a big loss to that family, to everybody."


Flanigan says the traffic was so bad out on Tybee that getting help to (the woman) wasn't easy. They ended up taking her to the light house, hoping Life Star could get her to a hospital in time, but it was too late. (text courtesy WTOC, edited)

As a captain, it's your job is to ensure that no one falls out of your boat: you must consider all of the things that could cause this to happen and make sure it doesn't. When someone climbs into a boat you are operating, you are responsible for their life.

This happens so often in America that there is a website specific to these events. Click here to learn more about propeller accidents.

One of the ways that people get thrown overboard is by leaning or sitting on the gunwale or side of the boat - this will earn you a fine from law enforcement unless you have a railing that is clearly high enough to prevent you from going over it. Coast Guard rules require a railing that is 39.5 inches in height to excuse a child under 13 years old from wearing a life vest on a commercial vessel. If there is any doubt - put vests on. A sudden heading change or violent rocking motion by wave or wake or wheel has resulted in many unplanned ejections. A sudden acceleration or deceleration without warning can cause a passenger who isn't ready and seated or holding on securely to leave the boat.

No one thinks this will happen to them. Until it does. Children love to sit on the bow of a boat with their feet hanging over - but a SUDDEN stoppage on a hidden sandbar from 25 or 30 miles an hour can put them in the water - even with a bow rail.  Inertia will rip little hands from railings and squirt bodies through the narrowest of gaps between rail and deck. Then, when the boat resumes forward motion - when the trailing wave overtakes the stern and lifts the boat free of the bar - the child is run over. I flew that kid from the Ogeechee River. The dad was absolutely destroyed by hurting his own son. You do not want to be the dad or mom standing at the nurse's station at Memorial while the trauma team tries to save your child's life. Please, trust me on this.

I have done dumb stunts on a boat myself. I ain't preaching here, I am confiding - it can happen to anybody.

There are a number of things that can cause a boat to suddenly and unexpectedly change course and speed. Submerged logs or sandbars, a steering gear malfunction, a throttle or fuel control malfunction, even an air bubble or slug of water in a fuel system: use your imagination and you can come up with more. Ask yourself if your passengers are ready for this at all times while underway. The fact that this has never happened to you yet doesn't mean it won't happen on your next trip.

The mark of a competent and safe captain is that she considers all threats and mitigates them as much as possible. A short discussion before leaving the dock works wonders.

"Hey guys, the most important thing I am going to do today is bring you back to this dock in one piece, alive and well. Let's all focus on that as we have fun." That is the beginning of my safety briefing on the Island Explorer as we leave the dock at Hogan's Marina. And I mean it. Injuring or losing a passenger is too terrible to contemplate; but I do, each and every time.

While boating, announce "clear prop!" before lowering a motor into the water, starting it, or putting it in gear. This tells your passengers that something is happening and helps with "situational awareness".  Never accelerate without verbal warning - the Boat US phrase is "coming up." You could say, "here we go" or "hang on." Accelerations and decelerations should be smooth and deliberate - unless it's an emergency stop. Because you may have to stop in an emergency, all passengers should be seated or hanging on to a secure handhold when running at speed,  A person standing up and not hanging on to something can fall from even small power changes. When we ride in a car, we sit in a seat with a seatbelt on. In a boat, we are much less secure.

There are many sources of boating safety instruction, some are online, and some of them can reduce your insurance premium. Contact the US Coast Guard Auxiliary or Boat US for more information.

(Disclaimer: As is the case with our safety-related posts at HelicopterEMS.com,  and our articles in Vertical 911 Magazine involving real-world accidents; it is not our intent to reopen old wounds or cause hurt to the individuals involved or their loved-ones. No one walks out to a helicopter or up to a boat thinking to themselves, "well, I am going to cause pain and suffering today." Our goal is to learn from real-world mishaps in order to prevent their re-occurrence. "What happened? How did it happen? How can I avoid it happening to me?) 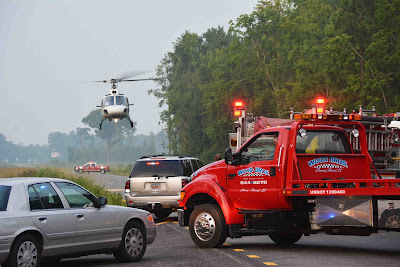