"Blood Is Thicker Than Water!"

As you cruise the Wilmington River north from Thunderbolt, you shortly come to Bonaventure Cemetery on the west bank. Bonaventure is a beautiful place, with grand and ancient live oaks that have Spanish moss dripping from their branches as they provide shade for the graves of countless characters and heroes. It is said that these trees were planted to form the letters M and T. While the M was for the Mullryne family, the T was to honor the Tattnalls.

Colonel John Mullryne founded Bonaventure Plantation near Savannah in 1762 after moving here from Carolina.  Josiah Tattnall Sr. had married Colonel Mullryne's daughter Mary, and they moved to Bonaventure as well. By 1771 Mullryne and Tattnall together owned 7000 acres of Georgia land, "stretching from Ebeneezer to Sunbury." (from "Historic Bonaventure Cemetery," Wilson and Johnson, 1998) Mullryne also built the third Tybee Lighthouse in 1773!

From Wikipedia, "The first house on the plantation, made of English brick, was destroyed by a fire on 7 January 1771. John Berendt wrote in his 1994 book 'Midnight in the Garden of Good and Evil' that a formal dinner party, held by either Mullryne or Tattnall, was in progress when one of the servants informed the host that the roof was ablaze and that nothing could be done to stop it. The host 'rose calmly, clinked his glass, and invited guests to pick up their dinner plates and follow him into the garden,' where they ate the remainder of their meals in the glow of the flames." (story continues below) 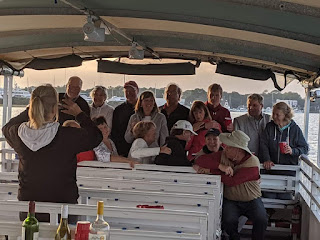 Tattnall Sr's second son, Josiah Jr, was born in 1764 at Bonaventure and went on to become Governor of Georgia in 1801, He is also remembered for introducing a new strain of  "Sea Island" cotton from the Bahamas to Bonaventure's fields. Tattnall Jr. also had a son named Josiah Tattnall (the 3rd). This man had an amazing life and went on to become a national, rather than local or state figure. Oh, and he also married his first cousin! (see New Georgia Encyclopedia)

He joined the United States Navy in 1812, when America was at war with Britain. Tattnall fought in that war but, apparently, didn't harbor a grudge about this later. Josiah Tattnall the 3rd served in several more wars including the Barbary Wars (under Stephen Decatur), and the Mexican War of 1846-1848. In 1858 he was commanding the East India Squadron near Hong Kong. Britain was then engaged in the Second Opium War with China and Tattnall observed British ships in a gun battle against forts on Chinese soil.

In violation of the United States' neutral status in that war, Tattnall entered the fray and assisted the British with American guns. When taken to task for this breach of military discipline and national protocol, he defended his actions with the phrase:

"Blood is thicker than water!"

He was probably referring to the shared heritage of the United States and Great Britain, and perhaps had considered that his grandfather had come from England and, remaining a loyalist, had fled Georgia during the revolution. The Tattnalls had British roots!

Tattnall served on and commanded many vessels while in U.S. Navy service, including the frigates (original) Constellation and Constitution. The original Constellation's replacement, built with parts of her original framing, is moored today in Baltimore Harbor and open for tours. Click for a virtual tour.).

The USS Constitution is still on the active rolls of the United States Navy and is the only active US Navy ship that ever sank another ship. She is preserved today in Boston.

Commodore Tattnall had a walking stick made from the live oak of the Constitution, whose timbers came from our barrier islands, most likely Saint Simons. That scrap of wood went full circle, because it came from a Georgia barrier island and is back in Georgia now in the collection of the Georgia Historical Society.

During his service to the Confederacy, Tattnall felt compelled to order the destruction of his flagship, the CSS Virginia (Merrimack) due to advancing Union Forces. He was eventually captured near Savannah by Union forces under Sherman, and made a prisoner of war. After the civil war, he spent four years in Nova Scotia before returning to Savannah, and Bonaventure, where he died and is buried, next to his kin.

Next to his blood, which is thicker than water.