If you spend time on the waters in our area, you should know that the works of the United States Army Corps of Engineers (USACE) are quite literally all around you. They are as active today in protecting the environment, and helping mankind work with nature and benefit from her, as ever.

Sidebar: When you pass by the oxygenation stations on the Savannah River - know that the Corps was involved in that...

The Dissolved Oxygen Injection System used to mitigate the effects of deepening the river
for Post Panamax ships on endangered species. Although it's easy to think of it as a gigantic and uber-expensive aquarium-pump or, "bubbler," it's a bit more involved than that.


And when you pass by Fort Pulaski, know that the Corps was involved in that project as well. 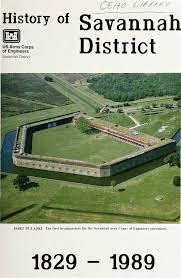 I came across a publication dated the year I came to Savannah, 1989. Although it (and I) are old now, it's still a fascinating source document for how things got to be the way they are around here.

From the text, "Because the passage through Parson's Cut suffered excessive shoaling, Congress, in 1890, called on the Corps to do a preliminary examination and survey of an alternative route in the area of Wassau and Skidaway islands. This site, Skidaway Narrows, was "a narrow, tortuous waterway formed by two creeks which united at their heads at the meeting place of the tides connecting Burnside River with Skidaway River..."