Full Sail! Spending A Day With The Other Crowd

This area's association with sailboats goes back at least to the 1500s, if not earlier. With the invention of what were at first external then eventually internal-combustion engines, maritime commerce was no longer left to the whim of the wind and the clutch of a current.
While the first machine-powered boats were roundly derided as "stinkpots," and used mostly to tow real vessels to and from their berths, over time a boat powered solely by sail became the domain of the very rich or the very poor.
For the rich, sailing is a sport. A way to exude coolness and sophistication and to generally be a wind-powered badass. Think Ted Turner, who learned to sail here and won the America's Cup trophy.
If Ted predates you, consider Larry Ellison's Oracle-sponsored freakship. It's a sailboat, I guess. Or maybe it should be called flying boat.
It's a marriage of airfoils and hydrofoils and it has an AIRBUS logo on it. They make flying machines. It's definitely flying. Suffice it to say, it has created a new class of sailors. 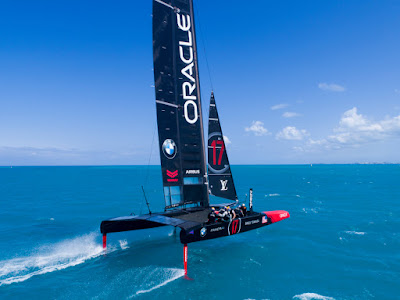 The poor sail because they can't afford to put the power in powerboat. One of my friends loves to say, "sailors get the wind for free and they want everything else for free as well." There does seem to be a cultural divide between powerboaters and sailors.
This weekend I had the chance to see and do
something different. I was invited to join a group of old sailors for a race in the Wilmington River. We departed the Yacht Club as a cloudy sky was clearing and the steady stream of stories got underway.
I quickly cottoned to the fact that competition sailing requires skill, cunning, and patience. A sense of humor helps too. I tried to stay out of the way and not get knocked on the head.
When the wind freshened and the old girl got her legs under her, we cut right along.  A sailboat moving through the water hums or vibrates slightly. It makes her feel alive. Like any machine; she talks to you through the tips of your fingers, the seat of your pants, and the soles of your feet.
There is work involved in sailing, and you can't proceed directly into the wind or to any destination laying in its eye. You must lay your heading sufficiently off the wind for it to flow properly across the sail and pull the boat forward. This involves zig-zagging or "tacking."
When you say something inappropriate to a woman and she slaps you, your mouth changes course and speed. That is one example of taking a different tack. "Coming about" in a sailboat (changing the heading to put the wind on the other side of the boat) is where that idea came from.
We have the mainsail and a "155 percent" jib up. I ask "what's it a hundred and fifty-five percent of?"
LB answers, "the J."
"Okay, what's the J?"
He says, "the J is the distance from the bow to the mainmast." All I know is, the jib is much bigger than the mainsail.
In practice, when we tack, the mainsail movement isn't that dramatic. But that big jib has to shift from one side of the boat to the other, and it gets pulled across the front of the mast by lines running from its bottom rear corner to winches on either side of the cockpit.  This is accompanied by quite a bit of snap, crackle, and pop! 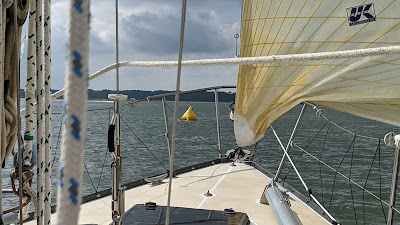 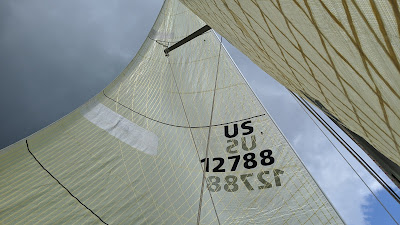 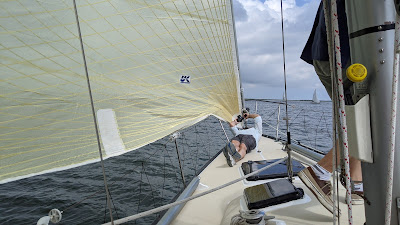 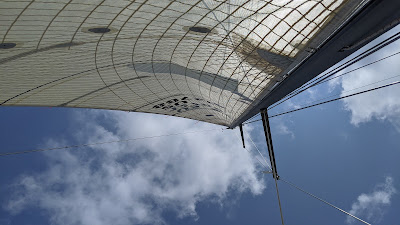 Our race involved boats of different size, speed, and sail inventory, and we had to size them all up. Another local favorite, "High Visibility" joined the fray with Etienne's wife aboard. It's a beautiful and fast boat with a capable crew.
We did spend some time waiting for an onshore breeze to spring up. That allowed us to enjoy a cold drink or two.
The starting line of the race lies between an official's boat and a floating marker. Sound signals provide warnings of the impending start. The trick is to cross the line immediately after the starting signal sounds but not before it. And you shouldn't crash.
After crossing the line we must work our way to windward, tacking up to a turn-marker. We pass as close to the floating mark as possible without touching it, then it's a downwind slide with jib on one side and the main on the other.
The apparent speed is reduced because we are going with the wind rather than across it, but an incoming tide gives us a good speed-over-ground. We must continue downwind past the starting line to a downwind marker, turn around that, and tack back to the start/finish line.
Now it's time for skill and experience and mental calculation, as we want to perform the least amount of maneuvering as possible and get across that line between the official's boat and the start (finish)marker. 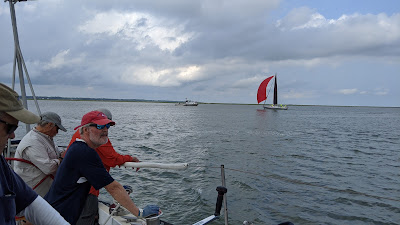 As we approach there is some discussion of whether or not the incoming tide will set us on the wrong side of this marker, but we clear it in good time.
We won't know how well we have done until all boats have finished because different boats are handicapped according to the hull design and sail layout. In any case, it's a fun and exciting way to spend a day on the river.

I spent a lot of time crouching, or should I say cowering, on that hatch cover in front of LB. And while I was trying to stay out of the way, I wasn't. At least no one yelled at me.
About the Sailing Vessel "Honey" 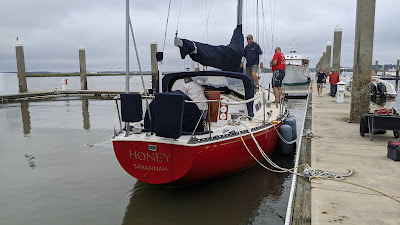 A well-to-do Chicago businessman wanted to win a prestigious sailing race between Chicago and Mackinaw in the early 1970s. He arranged for C & C Sailing Yachts to build a racing boat for that purpose, with as little extra weight and as much speed as possible. She was built in 1974 and won the race in her first attempt. The proud owner was celebrating aboard his winner after the race. He announced that he wasn't feeling well and died right there on the spot. At least he died a winner.
While some might take this as an omen, Savannah resident and former Vietnam Huey-pilot Jack Fitzgerald and a partner did not. They bought her in 1976. As his partner could never remember any of the female passenger's names, and called them all "Honey," and they gave her that name.
Honey is still a fast boat, and has won many races up and down the coast. She is known and admired, and her crew is respected in sailing circles. LB says she "gets really fast" when the wind exceeds 25 knots (when most of the boaters I know are looking for safe harbor and a cold beer).
Jack has owned Honey, either alone or in partnership, for 44 years! How many relationships do you know of that last that long? She has been overhauled, re-rigged, re-bottomed, and made more civilized with fine cabinetry and furnishings below. She is on her third diesel engine, a quiet 35 horsepower auxiliary with a prop that feathers when not in use. Perhaps the only thing original is her outline. 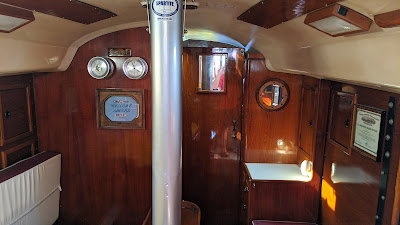 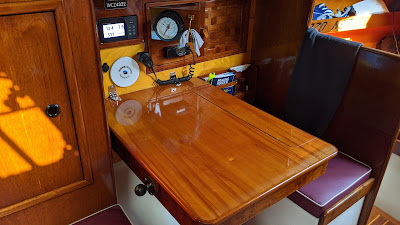 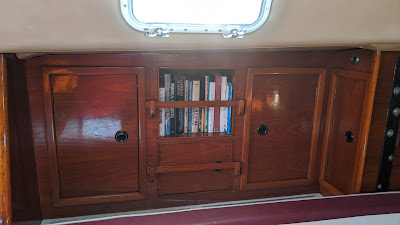 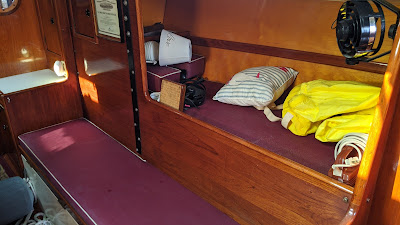 Jack has been sailing with mostly the same men since 1982, and while they don't sail together as often as they once did, they still exhibit quiet confidence, skill, and flawless crew coordination. Now that I think of it, aircrew coordination probably could trace its roots back to the coordination that was required to operate a ship in the age of sail.
When we prepared to depart the dock and again when we returned, everyone moved purposefully to uncover, and later re-cover her. What would have taken one boater an hour was accomplished in a few minutes. How often do your passengers stay and help you put up your boat?
If you are interested in getting involved with sailing in our area check out
https://www.chathamsailing.org
at September 28, 2020